These machines have allowed us to provide our customers with an unmatched level of versatility, superior edge quality, and extremely accurate cuts! The concept of waterjet cutting can be explained in three major steps, the generating of pressure, the transition from pressure to velocity, and the introduction of garnet.

Inside the waterjet nozzle is a small jewel orifice. The tiny jewel orifice's main job inside the machine is to convert pressure into velocity. This creates an extremely small stream of water, which by itself can cut through soft materials (pure waterjet cutting). The size of the orifice is what determines the cut width (also known as kerf) and orifice assemblies usually consist of ruby, sapphire, or diamond.

To increase the power of the waterjet stream and allow the machine through hard materials, a garnet (sand) is added within the abrasive inlet. The garnet is combined in the mixing tube which increases cutting power by 1,000X. This mixture of water and garnet exit the cutting head and cut through the selected material (abrasive waterjet cutting). Similar to the jewel orifice the mixing tube diameter will affect the kerf. 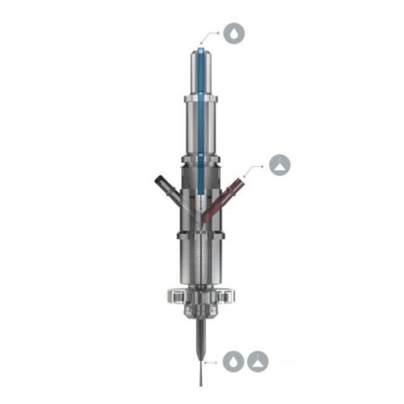 The original waterjet cutting process was first developed in the 1850s and since then it has evolved tremendously. While its first main function was to excavate materials in coal mines, it is now utilized in almost every industry to offer precise cuts on varying materials. Its latest improvement occurred in the 1980s when Mohamed Hashish, an engineer from Egypt developed the nozzle for abrasive waterjet cutting. This improvement in the machine's technology expanded its uses further and made it a more versatile method of cutting. Intelligent Cutting Solutions technology features Flow waterjet’s Dynamic XD cutting heads, their HyperJet pump, and FlowCut® Software.